The chemokine system is best known for its fundamental role in regulating leukocyte trafficking. Cell migration is governed by chemotactic cues that are generated by locally produced chemokines which are retained in the vicinity of the source by binding to cell surfaces, e.g. to  proteoglycans. Various cell types, such as endothelium, epithelium and stromal cells produce chemokines.

In lymphoid tissue production by stoma cells plays a pivotal role in segregating leukocytes into specific areas that are not defined by physical barriers. Hence, a hallmark of chemokine gradients is their local confinement. In order to generate and maintain local gradients it is necessary that sinks are placed in apposition to the source to avoid blurring. In some cases a hierarchical order where a chemokine/chemokine receptor system overrides attraction by other cues can also contribute to the retention of  cells.

It has been shown that atypical chemokine receptors (ACKRs), which act as scavengers for chemokines, can fulfil the function of efficient sinks. The laboratory compares the signaling properties of typical and atypical receptors, investigates the role of ACKRs in immune responses and tumor development.

Receptor proteomes of ACKR3 and CXCR4 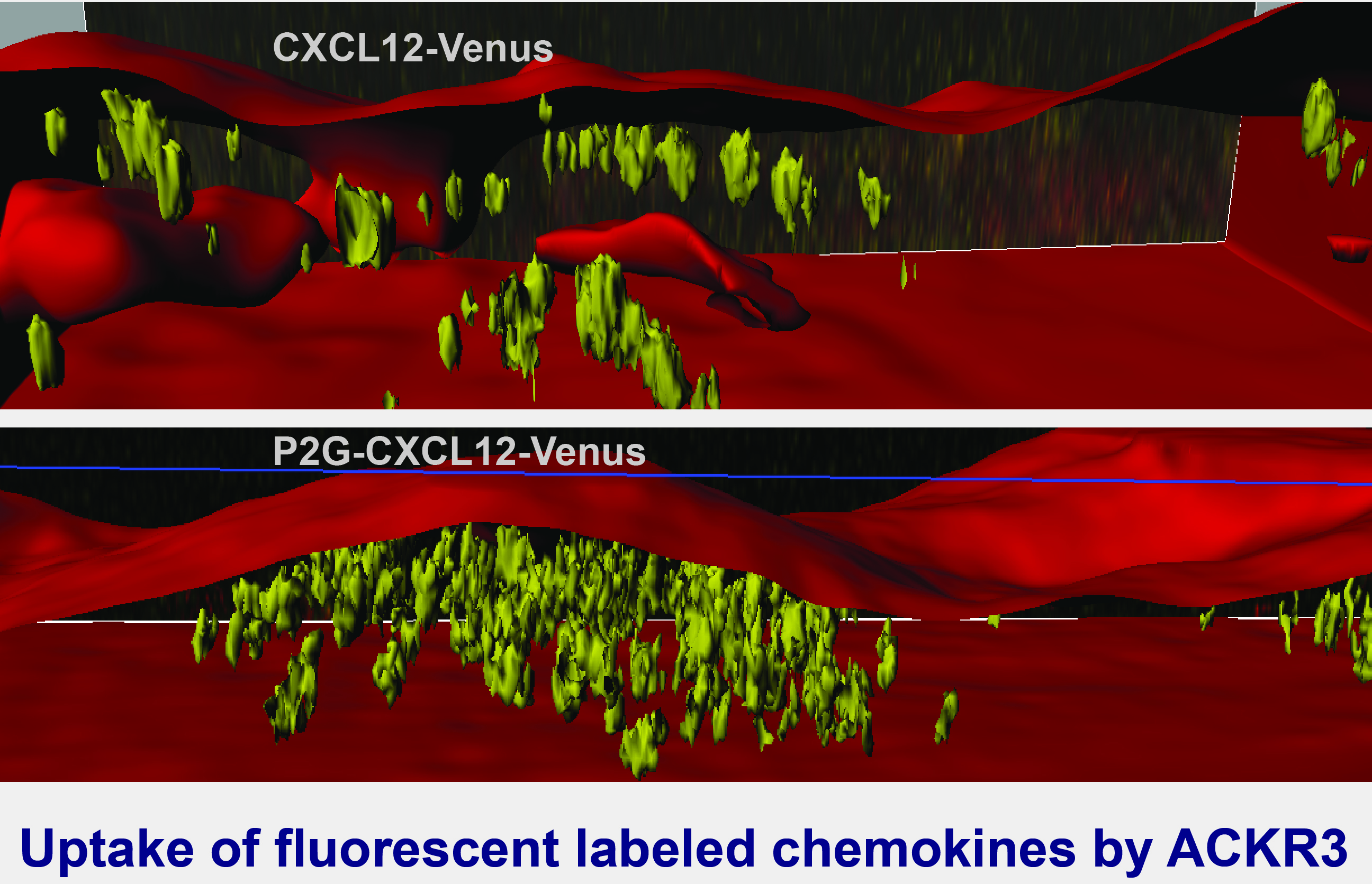 The phenotype is characterized by markedly impaired lymphopoiesis andmyelopoiesis, imperfect vasculature, abnormal brain and heart development leading to perinatal death. Among chemokine receptors, CXCR4 has unique signaling properties capable of promoting the sustained activation of intracellular signaling cascades, which is strictly dependent on the availability of extracellular CXCL12. ACKR3 evolved as critical regulator of the CXCL12/CXCR4 axis through it scavenging activity. In line with this hypothesis ACKR3 binds CXCL12 with about 10fold higher affinity than CXCR4. Despite that ACKRs share the heptahelical topology of G-protein coupled chemokine receptors, the ACKRs do not couple to G-proteins and do not activate typical downstream pathways.

Nevertheless, ACKR3 can recruit arrestin in a ligand dependent manner and may use this pathway for biased signaling.

Targeted deletion of ACKR3 is lethal, like elimination of  CXCR4, indicating a critical role in development. Our laboratory described ACKR3 as the selective decoy receptor for the chemokine CXCL12, and demonstrated its expression on leukocytes. Several studies suggest that the scavenging activity ACKR3 affects CXCR4 function by regulating the availability of CXCL12. Inline with this, we have proposed that ACKR3 regulates humoral responses by balancing the availability of CXCL12 during plasma blast trafficking in germinal centers. ACKR3 expression on plasmablasts is necessary to overcome the retention of the CXCR4+ cells in germinal centers by CXCL12. Hence, transient upregulation of ACKR3 at the plasmablast stage licenses the cell to egress follicles, and its subsequent downregulation allows long lived plasma cell homing to bone marrow niches. Interference with ACKR3 activity may therefore lead to compromised homing of plasma cells the bone marrow and impaired humoral protection of the host. 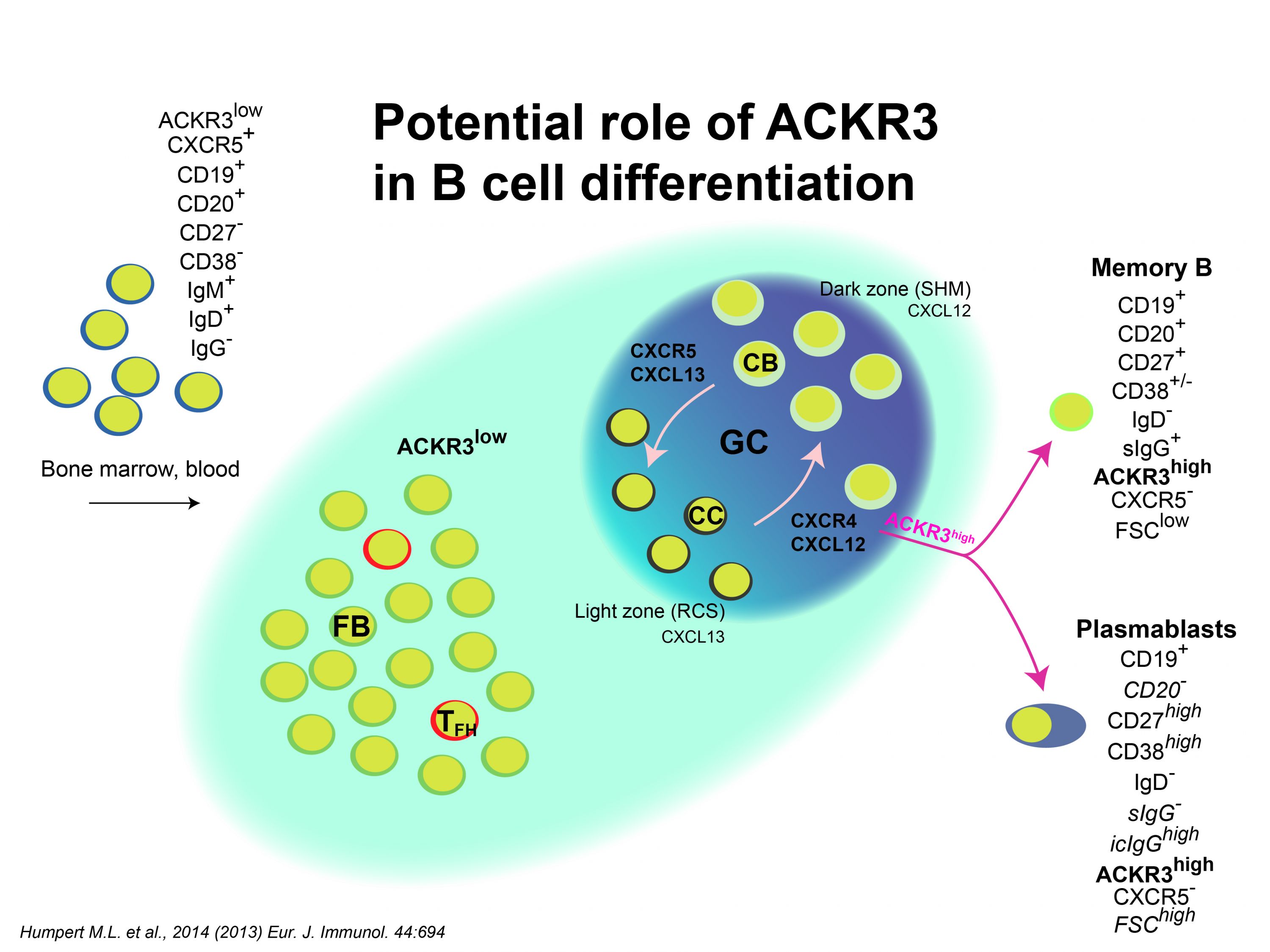 The high incidence of aggressive lymphomas, which mostly originate from lymphocytes of the germinal center (GC), urges for additional therapeutic strategies, particularly when efficient treatments can fall into relapse. The best prognosis is given when the tumors are early diagnosed and confined to the

primary site and the worst is when the cancer has metastasized. Metastasis formation requires migration of tumor cells from primary sites to niches where optimal growth and survival  conditions are found. This migration requires the expression and function of chemotactic receptors.

ACKR3 is expressed on many neoplastic cells. We are investigation the function of the receptor B cell lymphomas that originate from germinal centers. ACKR3 mRNA is indeed expressed in many diffuse large B cells lymphomas (DLBCL). Xenograft models of human DLBCL in immune suppressed mice indicate that the tumor environment massively alters surface expression of ACKR3, suggesting a contribution of the receptor for tumor growth and metastasis. Downregulation of ACKR3 with CRISPR/Cas9 in DLBCL results in markedly altered tumor growth and metastasis in this model. 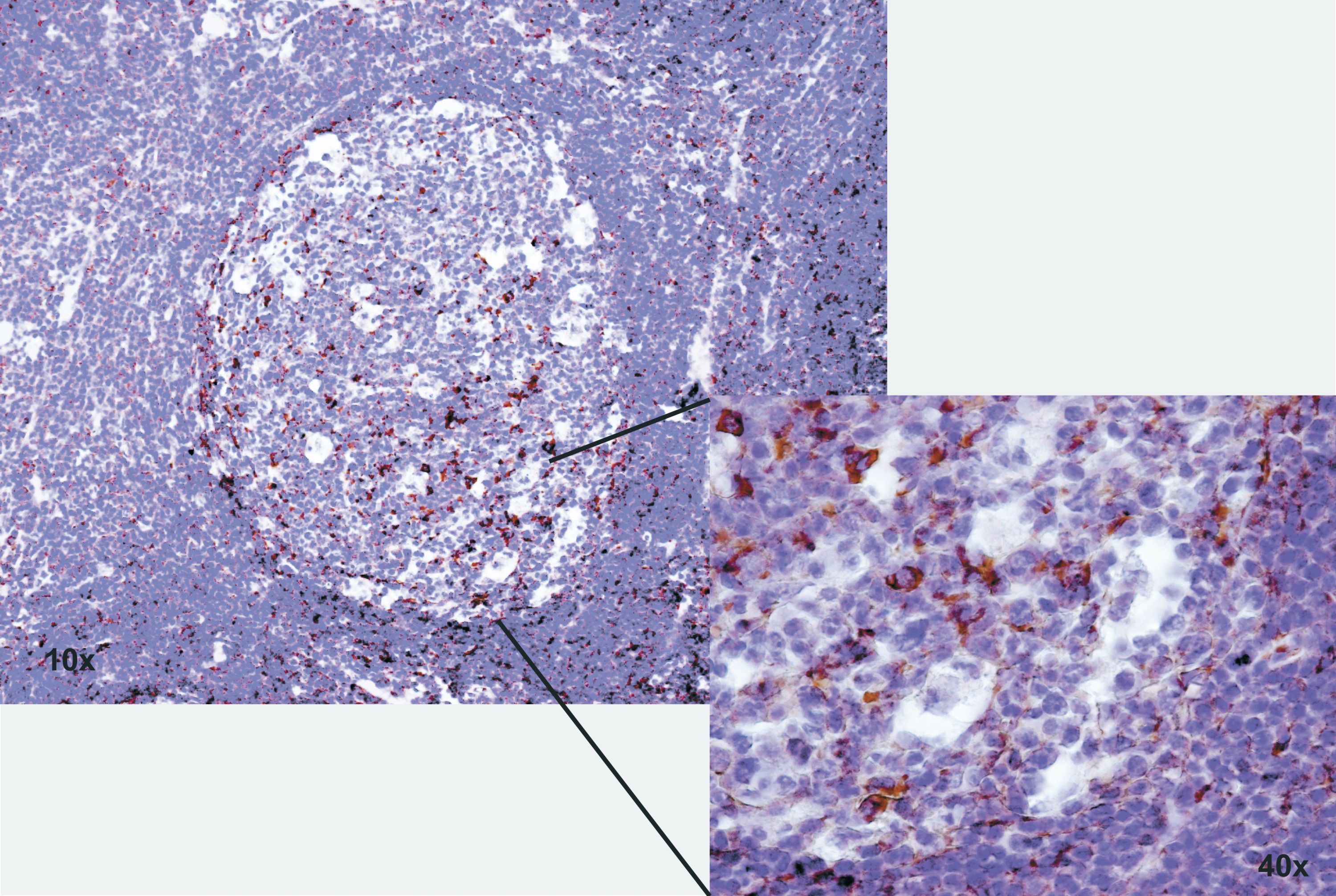 The small GTPases of the Rho family, Rac and Cdc42, are critical for rapid rearrangements of the actin cytoskeleton observed during filopodia and lamellipodia formation in migrating cells.  Activation of the GTPases is catalyzed by specific GTP exchange factors (GEF). The phosphatidylinositol 3,4,5-trisphosphate (PIP3)-dependent exchanger 1 (P-Rex1) is assumed to be involved in G-protein coupled receptor (GPCR)-mediated Rac activation. P-Rex1 activity is stimulated by the PI 3-kinase product PIP3 and by the βγ subunits of heterotrimeric G-proteins, which are released upon activation of GPCRs. Consistent with the activation by these cofactors and their cellular localization following stimulation of the cells, P-Rex1 is recruited to the plasma membrane. Overexpression of P-Rex1 or its suppression by siRNA markedly alters chemokine-stimulated migratory capacity of myeloid leukocytes, consistent with the assumption that GEF is required for efficient chemotaxis.

Investigations shall reveal the function of different P-Rex1 domains and their role in chemokine receptor-mediated signal transduction. In particular downstream of the chemokine receptor CCR2, a typical GPCR. To this end mouse bone-marrow derived hematopoietic precursor cells from animals lacking either the expression of P-Rex1 and/or P-rex2 or CCR2  are arrested by the conditional expression of HoxB8 and HoxA9. Various P-Rex1 mutants and variants of CCR2 tagged with epitopes suitable for fluorescent labeling are transduced into these cells and differentiated later into neutrophils and monocytes.  Assessment of the chemotactic responsiveness allows to delineate the function of different P-Rex domains and the localization of the chemokine receptor CCR2 during migration.