Human T cell response to bacteria of the Enterobacteriacae family: new paper by the Sallusto lab

A recent publication in European Journal of Immunology by the Sallusto group analyzed the human T cell response to bacteria of the Enterobacteriacae family.

Enterobacteriaceae are a vast family of Gram-negative bacteria that includes harmless symbionts and potentially harmful pathogens. The latter represents a global health threat being the cause of severe deadly infections, mostly due to the lack of effective vaccines to prevent Enterobacteriaceae infections as well as to the constant increase of multidrug resistant strains. Recently, carbapenem-resistant Enterobacteriaceae bacteria have been included in the list of antibiotic-resistant “priority pathogens” by the WHO. Although several studies have investigated the human T cell response to commensals and pathogens, a characterization of Enterobacteriaceae-reactive CD4+ T cells in terms of phenotype, antigen specificity and TCR repertoire composition in physiological and pathological conditions remains elusive.

They found that in the blood of exposed individuals Enterobacteriaceae-specific memory CD4+ T cells are enriched into the Th1*/Th17 helper subset, whereas this T cell subset result severely reduced in septic patients who also selectively lack circulating K. pneumonie-reactive T cells. Importantly, the researcher could also show that the major component of the memory T cells repertoire is broadly cross-reactive against different Enterobacteriaceae species and selectively expanded in the blood of exposed healthy individuals. Interestingly, these broadly cross-reactive T cells are also found in the naïve T cell repertoire. Finally, they identified the conserved outer membrane protein A (OmpA) antigen as a target of a large fraction of broadly cross-reactive T cells.

Collectively, this study points to the existence of immunodominant T cell epitopes shared among different Enterobacteriaceae species and targeted by cross-reactive T cells that are readily found in the pre-immune repertoire and are clonally expanded in the memory repertoire. Overall, this research provide a better understanding of the human immune responses against Enterobacteriaceae and give insights for the development of new strategies for prevention of severe Enterobacteriaceae-infections.

This work, published in the “The European Journal of Immunology”, was realized in collaboration with researchers from Istituto Superiore di Sanità (Rome, Italy) as well as with clinicians from University of Pisa (Pisa, Italy) and from Sapienza University of Rome (Rome, Italy) and with the EOLAB, Ente Ospedaliero Cantonale, Bellinzona. The study was financially supported by the European Research Council, the Swiss National Science Foundation, and the Helmut Horten Foundation. 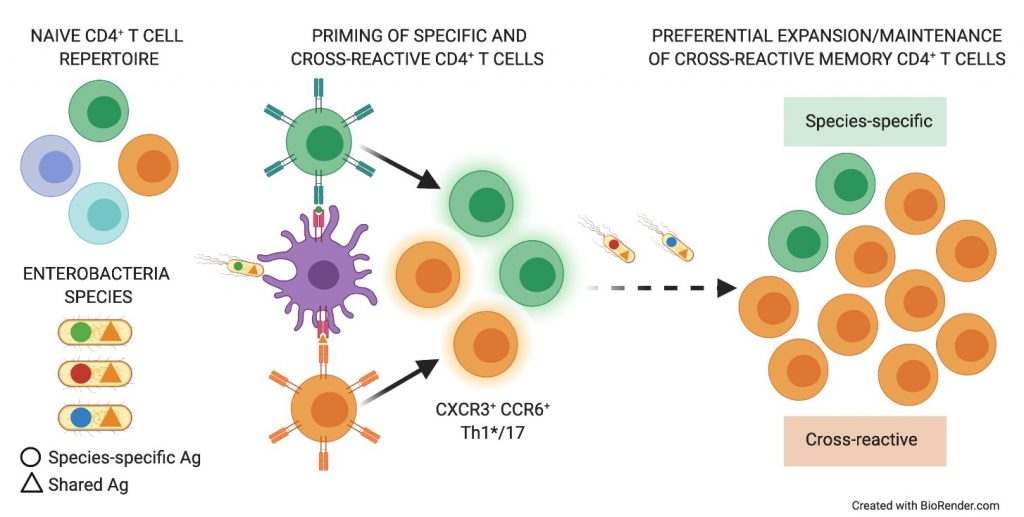